The campsite Le Val de Bonnal is a paradise for water lovers. With a whopping seven waterslides, this pool complex is an exciting prospect for an adventurous family. The lagoon pool is a rocky paradise with mushroom fountains and forest surroundings. This oasis is the perfect place for the kids to have a splash around whilst the grown ups chill out on the sunloungers. And should you tire of swimming, practise your swing on the parc’s golf course, set in the grounds of the Château de Bournel, while the parc ‘animateur’ organises sporting events for the kids! In high season, the parc also organises discos for teenagers and lively evening entertainment for the whole family.

There are at least four lakes at the manor. The first lake lends itself especially for wind surfing, canoeing and swimming. Besides that, there is a beach at this lake. Two lakes are exclusive for fishers. On the last lake you may practice water-skiing. If you haven’t done this before you can take lessons here. It takes about one hour to hike around all four lakes. A cycling tour around the lakes and the surrounding is a must too.

About 14km from the parc is the Château Medieval d'Oricourt which was built in the 12th century and is extremely well preserved. Besançon is just under 50km away and most definitely worth a day out, rich in history with its 19th century astronomical clock, cathedral, palaces and museums. There are also the Gouffre de Poudrey caves where you can take a quided tour and marvel at its 'son et lumière' (sound and light) show.

Video by courtesy of Campsite 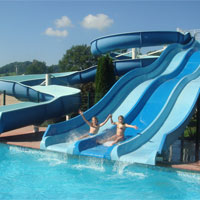