Spina Camping Village is a holiday village in a very special place on the Riviera Adriatica, the Italian east coast on the Adriatic. Campeggio Spina is located in the middle of one of Italy's most varied resorts: Lido di Spina. You will camp on a narrow strip of land between the sea and the enormous inland sea Valli di Comacchio. Despite every luxury and the comfort of the amenities in and around the camp grounds you will stay in close harmony with nature.

Spina Camping Village is ideal for families that prefer spaciously laid out campsites. A number of facilities such as the swimming pool, supermarket and entertainment arena were expanded for the 2011 holiday season. The camp site has its own private beach!

Spina Camping Village is located in Comacchio, in the middle of the Parco del Delta del Po, a protected nature reserve. Discover the fascinating world of birdwatching in this stunning area during your holiday. The beach - with its private area, parasols and sunbeds - is just 60 metres away and can be reached via the free bus shuttle service.

The Parco del Delta that stretches out for several kilometres behind the sea is one of Europe's most beautiful reservations where rare birds migrate to, including pink flamingos....Close by Spina Camping Village: Ravenna with its basilisks and beautiful Byzantine mosaics, Ferrara, a monument to Italian renaissance, Faenze, famous for pottery of the same name, and of course Venice with its unique atmosphere! The town of Comacchio with its canals and the famous Treponti bridge is just north of the camp site. Mirabilandia, on of Europe's largest theme parks is located between Ravenna and Cervia.

Video by courtesy of Vacanceselect 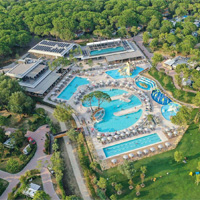 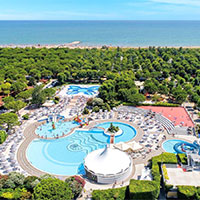 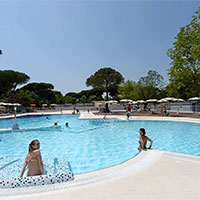 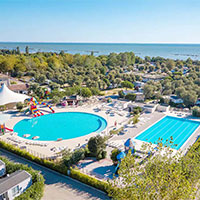