This camp site in the most easterly part of Italy (the area around Trieste) is called Campeggio Mare Pineta Baia Sistiana in full. You have wonderful views of eastern Italy and Istria from high up over the Sistiana Bay, one of the most beautiful parts of the Adriatic.The camp site is about 500 metres from the sea. Off to the beach? Then take the campsite shuttle train that runs between the campsite and the beach throughout the day. If you prefer to walk it's just a 20 minute stroll and you'll be at the water's edge.

As for the camp site itself; there are beautiful natural grounds with tall pine trees which provide pleasantly shady spots, and a lovely swimming pool with deckchairs. There is a tennis court, table tennis and a basketball field so you can easily spend an hour or two playing sport if that's what you want. There is also a nice playground for the little ones.

Enjoy some cycling or a game of tennis and later relax with a refreshing drink in the bar or have a delicious Italian meal while the entertainment team put on a show. There's entertainment and a playground for small children.

The narrowest part of Italy is in the very north east of the country, where the coast road to Trieste is only a few kilometres from the Slovenian border. The low land of the Italian northern coastline is been replaced by rocks that are typical of the Croatian coastline. At one of the natural bays is Sistina, between the fortified castles of Duino and Miramare. These castles once protected the city of Trieste against it enemies.

Trieste is a lovely city, full of historic builings, museums and lots of pleasant terraces. Boat trips are available via the castles of Trieste. Enjoy the wonderful countryside that surrounds the Isonzo river. Visit on of the many 'osmizze'. these are characteristic farmhouses where you can taste their home made wines.

Video by courtesy of Suncamp 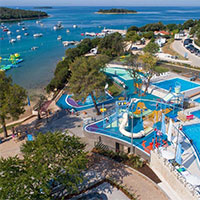 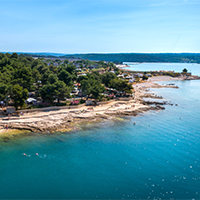